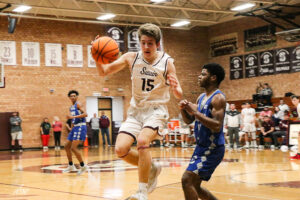 Bryson City – The Maroon Devil basketball team is senior laden this season.  Following a disappointing loss to Hayesville in the Smoky Mountain Conference Championship game, the Devils wanted to leave their home court on better terms.  Mission accomplished, as the Devils played their best game of the year in a 100-78 win over Cherryville in the first round of the NCHSAA 1A playoffs.

Swain roared out to a huge start, building as much as a 17 point lead over the first quarter of play.  Cherryville dug in and fought their way back, eventually knotting the score in the second quarter.  But a 7-0 run over the final seconds of the quarter by the Devils gave them a 14 point halftime advantage.

Donnavin Groenewald keyed the big 7-0 run, scoring all 7 points.  Groenewald was fouled in the act of shooting with 7.1 seconds left before the half the Devils with a 7 point lead.  Following the foul Cherryville was accessed a technical foul.  Groenewald went to the line and sank all 4 free throws.  To cap off the surge Groenewald nailed a corner three as time expired to give Swain a 55-41 halftime advantage. 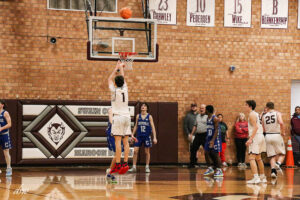 The Ironmen never recovered, each time they appeared poised to cut into the lead the Devils answered. 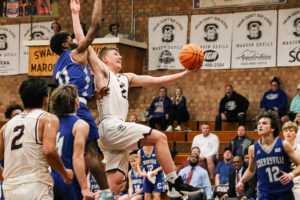 The Maroon Devils will travel to Thomasville, the number 4 seed, on Thursday for second round action.